This article describes the mounting and installation of the ENA2060 amplifier.

The amplifier’s mechanical construction is rigid enough to be mounted using the six slots in the mounting flanges to secure it to the mounting surface in the rail carriage.
For the rolling stock environment, it is considered good practice to mount support rails to better secure the amplifier.

Ethernet Ports 1 & 2 are connected to the Train Communication Network (TCN) for exchanging data packets with the SIP server and other systems such as Network Monitoring System (NMS).
Port 1 is the main Ethernet connector while Port 2 is the backup Ethernet connector. The amplifier shall be connected to the network using a 4-pin M12 D-Coded male connector. There are two LED indicators next to each Ethernet port:

The status indicators display the status of important parameters such as power supply and faults.

The Multi-Connector can be used for various functions as described below. 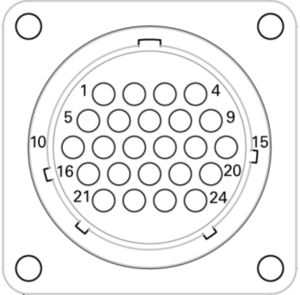 The Audio Line / Speaker connector is a 4-pin M12 A-Coded female connector that has two channels with 100-volt output per channel. 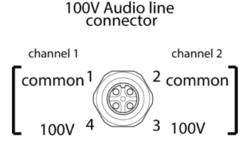 This is an M4x20 stud for fixing a tab to the chassis and grounding the amplifier. 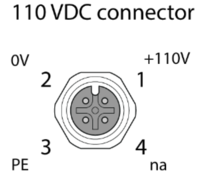 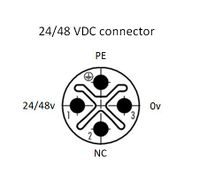