Multicast Paging enables IP intercom stations in Edge mode to receive VoIP audio as multicast paging from 3rd party iPBX (e.g. Asterisk). The feature is supported by both INCA stations and Turbine stations. Up to 10 different Multicast paging groups can be defined. 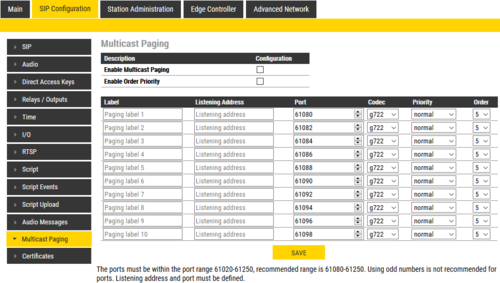 The priority mechanism has the following properties:

To stream from VLC does not work due to variable payload size, same problem as on SNOM (Not possible to fix this). http://wiki.snom.com/Category:HowTo:Multicast_Audio#Multicast_via_VLC

Go to Pulse Server -> Group Call and use the multicast address/port written in each group call. Note that the clients making the group call must use same codec as chosen for multicast paging.

Use Multicast Paging with Asterisk

Call 8998 to speak on multicast address:

Use Multicast Paging with Freeswitch iPBX