VLAN Tagging is the practice of inserting a VLAN ID into a packet header in order to identify which VLAN (Virtual Local Area Network) the packet belongs to. More specifically, switches use the VLAN ID to determine which port(s), or interface(s), to send a broadcast packet to.

VLAN tagging is supported by stations in the INCA family. 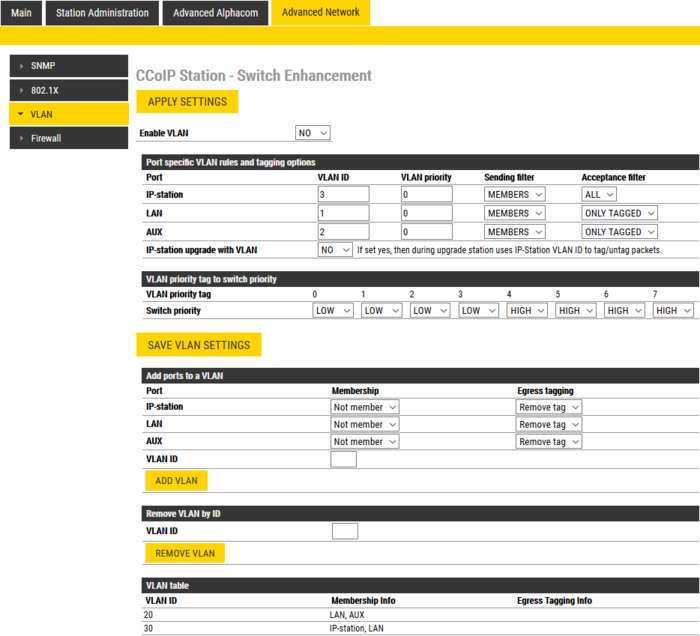 Clicking the Apply settings button will apply the chosen settings. With the exception of a restart, the saved settings will not come into effect until Apply settings is clicked.

Enable VLAN:
This option determines whether the switch uses 802.1Q or not. If this is enabled, the switch is VLAN aware. Select YES or NO from the dropdown menu.

Port specific VLAN rules and tagging options:
Here, it is possible to specify which VLAN ID and priority the ports should assign untagged packets to. Tagged packets are not changed.

will only reach another port which is a member of VLAN ID 1. Select MEMBERS or ALL from the dropdown menu.

TAGGED or ALL from the dropdown menu.

Clicking the Add VLAN button will add the current chosen settings to the VLAN table below. If a VLAN in the VLAN table already exists with the chosen VLAN ID, then the settings will be updated.

Remove VLAN by ID:
Here, it is possible to determine which VLAN is to be removed from the VLAN table by specifying the VLAN ID, then clicking the Remove VLAN button.