This article describes how to integrate the Lenel OnGuard System with the AlphaCom system. The integration is using the MPC Data Protocol.

For integration between Lenel OnGuard and the IC-Edge system, see here.

The following information is relevant for all versions of OnGuard. Onguard 2012 introduces some new possibilities.

The required settings in AlphaCom in order to communicate with Lenel OnGuard are: 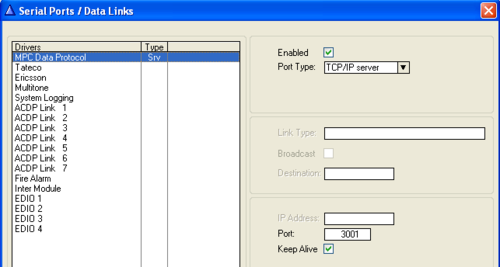 Note that after 'Send change' or 'Send all' the AlphaCom needs to be reset, use the 'Reset' button in AlphaPro.

In the Web interface of the AlphaCom, go to System Configuration > Filters: 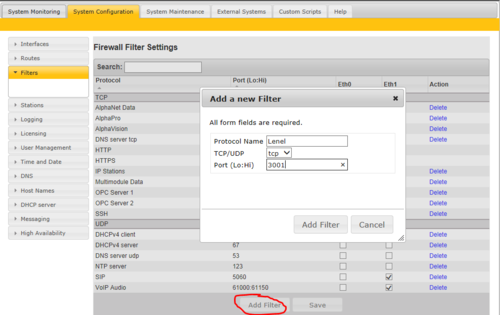 Defining TCP port 3001 in the firewall

The following step is to enter the intercom stations into OnGuard

Adding a station to OnGuard

In order to show the directory numbers of both stations in a conversation, make sure that the column Intercom Station Called is shown. To make this column visible, select the Main Alarm Monitor window and choose menu item Configure>Columns.... Select the columns which should be visible.

A call to a function which is not defined in System Administration is reported as a call to an unknown value. To define function directory numbers follow these steps

Calls to in OnGuard undefined functions are automatically available in System Administration and can easily be edited at a later stage.

Intercom functions which are shown in Alarm Monitoring are reported from the AlphaCom server as a message with 0507 as a header. This opens the possibility to generate such messages from the event handler if these messages are not normally generated by the AlphaCom. A useful example are line error reports. 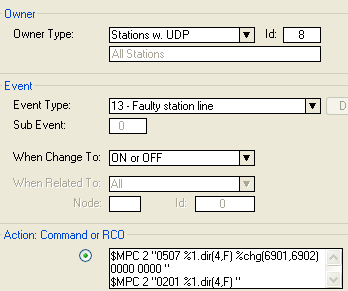 Define an event to report line errors to OnGuard

In AlphaPro define an event for Faulty station line. Use 2 dummy directory numbers which are used towards OnGuard as Intercom Function directory number, for instance 6901 and 6902 Use as action the following string:

The line error directory numbers must also be defined in System Administration, using the same procedure as described above.

Events in other sub-systems can result in calls being setup in AlphaCom, while AlphaCom events can trigger actions in other to OnGuard connected sub-systems. As programming of these trigger actions differs depending on the sub-systems involved, it is outside the scope of this guide to give a comprehensive description, below are just a few pointers.

Linking of events in the AlphaCom with actions in other sub-systems can be done by selecting Access Control > Global I/O... in System Administration. AlphaCom related events can be:

Intercom Function lists all parameters which are defined for the 0507 data message in the steps above, including custom defined functions generated through the AlphaCom event handler, and can all have specific actions linked to them.

Note that for the programmed event linkage to work the Linkage Server must be running.

NOTE:
In Onguard versions older than OnGuard 2012 it is possible to start functions such as voice messaging in the AlphaCom, but this requires the addition of the following lines in the file ACS.INI, which is located in the directory c:\Windows [Stentofon] AlphaNet=1

As from OnGuard 2012 this change to the file ACS.INI is no longer required.

Intercom stations which are defined with System Administration can be imported into maps using the program MapDesigner. Intercom stations are listed on the left hand side and can easily be dragged to a location in a map. 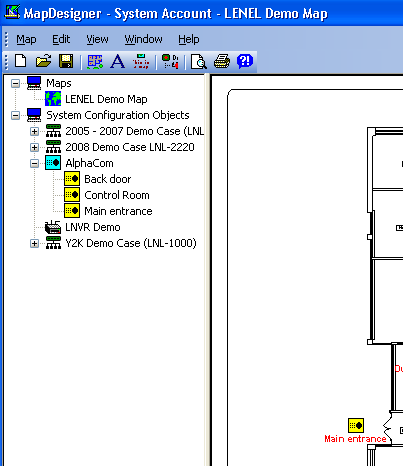 '6.5.624_Zenitel_Accessory_Add-On.msi' provides an updated interface module and takes advantage of new messages and icons which have been included for STENTOFON intercom stations in OnGuard 2012.

'6.5.624_Zenitel_Accessory_Add-On.msi' can be downloaded from here.

OnGuard 2012 introduces some new icon appearances for states in which an intercom station can be. The following states can be indicated by icons in a map:

OnGuard has some pre-defined icons for intercoms in the above states. It is possible to add custom icons to OnGuard. A suggested set of STENTOFON icons can be downloaded from here. In total OnGuard defines 10 intercom icon states, which are not all used by the AlphaCom-OnGuard integration, but the downloaded set does define an icon picture for all 10 states.

OnGuard has some predefined messages which are shown in Alarm Monitoring depending on the data which is received from the AlphaCom. In addition it is possible to add custom messages by defining 'Intercom Functions' together with a text and parameter. Alarm Monitoring displays the following messages: 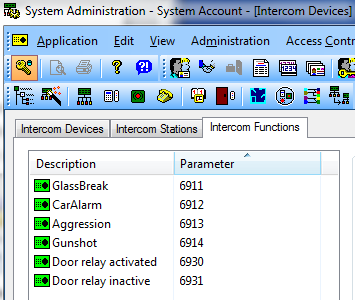 Call from a guard

It is now possible for a guard to simply establish a call to a remote intercom station by clicking on the icon of that remote intercom. This function can also be invoked by a right click on the intercom icon and selecting 'Call Intercom' from the drop-down menu. For backward compatibility the previously available 'Place intercom call ...' is also still available.
The guard intercom station must be programmed specifically as an OnGuard 'Monitor Station'. 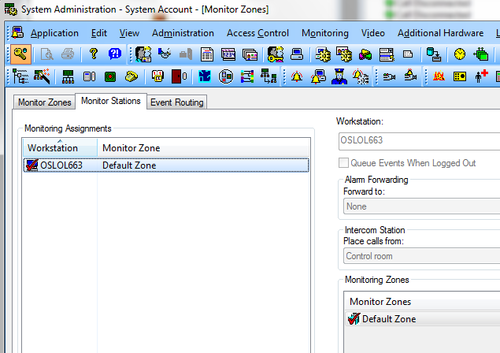 When programming the AlphaCom event handler with custom data messages to be sent to OnGuard, please take note of the format of the message as shown below. Every message has a <space> character in front of the closing ". If this format is not used exactly as shown, the OnGuard Communications Server will raise a 'Communications Lost' event and reset the link to the AlphaCom.

The reporting of line errors is not a standard feature on the protocol which is used between AlphaCom and OnGuard. To be able to use this new possibility in OnGuard an event needs to be programmed in the AlphaCom event handler. The codes which have been reserved for this in OnGuard are:

Program a an event as follows: 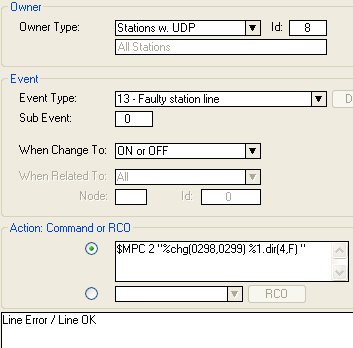 Station in a call queue

Stations which are placed in or removed from a call queue can be reported by the AlphaCom through the 'Received Mail'event. OnGuard displays stations in a queue with a specific icon appearance. Queue entries without any "Related To" information (e.g. Line Errors) are filtered away. Stations entering a queue or being removed are also indicated by messages in Alarm Monitoring. The codes which have been reserved for the event are:

Program an event as follows: 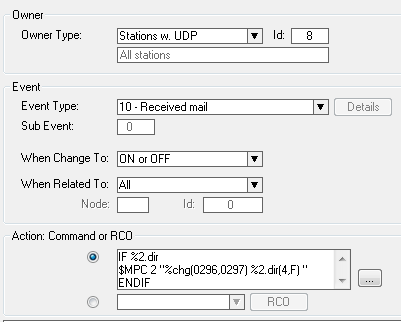 Stentofon intercom master stations have the possibility to open a door by pressing digit 6 during a conversation. Normally this operates a relay which is used to unlock the door. When using OnGuard, pressing digit 6 should be signalled to OnGuard after which OnGuard will give the command to unlock the door. The event owner must be station at the door, the related to station can either be a single station or a complete UDP group if several guard stations are allowed to open the specific door. The action command string is

Note that 6930 and 6931 are just taken as an example and just have to be numbers which are not used anywhere else in the intercom system, they do not need to be defined as a directory number, as they are not actually dialled. 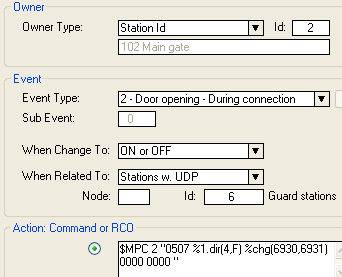 These numbers do need to be defined in OnGuard, Intercom Functions. By using the OnGuard Linkage Server it is possible to trigger the door opening action in OnGuard. The programming as shown gives a command to unlock the door and a further command to lock the door again. If in the specific installation this second command is not required it is possible to only use the 'When Change To: ON' option. The action string can then simply be:

Linkage to an AlphaCom action 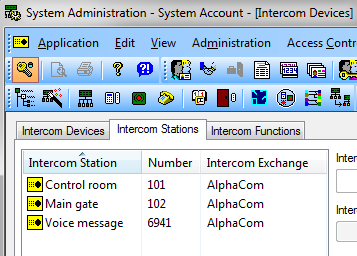 Intercom function to trigger an action in OnGuard

In order to interface the AlphaCom exchange to OnGuard 2013 an addon is required. 6.6.287_Accessory_Add-On_for_Zenitel_Support_1.0.3.zip can be downloaded from here.

In certain cicumstances it can be a requirement to block calls from specific sub-stations to the guard(s) for a limited period of time. With the following programming blocked stations can be indicated in the Alarm Monitoring screen. The example assumes that the substations make a call request to the guard(s). Further calls from a substation can be blocked during the time that the call is established between guard and substation.

Define a DAK on each guard station (UDP 1 group member stations), which dials the defined event trigger dirnr both from idle and during conversation:

Define 3 events. Event 1 (this event stores in UDD the station with which the guard is in conversation):

In order to interface the AlphaCom exchange to OnGuard 2014 an addon is required. 7.0_Accessory_Add-On_for_Zenitel_Support_1.0.2.zip can be downloaded from here.

Lenel OnGuard in an AlphaNet

As from AMC-IP software version 11.2.3.5 and OnGuard 2012 it is possible to use OnGuard also in an AlphaNet where almost all functionality is available which is also available when connected to a single exchange. This does however require some additonal event handler programming in all AlphaCom exchanges which are not directly connected to OnGuard, the 'remote exchanges'. All event handler programming which is described in the article Lenel OnGuard System to enable special functionality needs to be repeated in all exchanges, this article only describes the extra programming required for AlphaNet use.

As stated in the introduction, this programming only needs to be done in the remote exchanges, not in the exchange with which OnGuard is communicating.
The examples below assume that OnGuard is connected to node nr 1. All MPC data strings are routed to that node (@1).
Note that each command string has a <space> in front of the closing " character.

Call to a subscriber in private 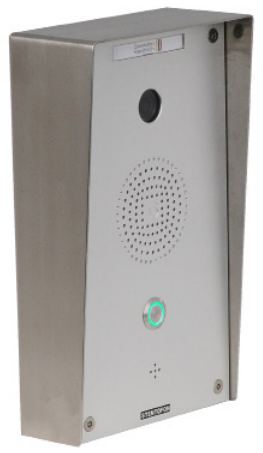 The camera CP-CAM is used in the IP Video Door Station, type number 1401110100. The CP-CAM camera has been certified with the following Lenel products:

Integration is through an xml-file, STENTOFON.xml, which describes the camera capabilities. The xml-file is part of an Add-On which is available from Lenel. It is also available from the AlphaWiki Download section.

LNVR, Lenel NVR, is the Network Video Recorder from Lenel which is closely integrated with OnGuard. LNVR can run on dedicated hardware available from Lenel, or can be installed as a software product on 3rd party PC hardware. For CP-CAM video to be able to be viewed via and recorded on LNVR, the STENTOFON.xml file must be installed on the LNVR-hardware.

OnGuard offers an optional feature that video from cameras can be viewed directly. This feature can be used in case the LNVR is not available (not purchased or failed). Note that in that case there would be no recording facility.

To activate the Direct Connect feature in OnGuard:

Camera setup for use with OnGuard