This article describes how to use the inbuilt VAD (Voice Activity Detection) in IP stations as a Scream Alarm.

The programming example describes a nursery. There are two Staff stations and a number of Nursery stations that are used to detect when babies are crying. The Nursery stations have their inbuilt VAD enabled, and the Staff stations can switch the function on/off with a toggling DAK (D1 = I9534). In case of a IP Flush Mount station, the activated functionality is indicated by a red LED in D1 (DAK1).

DAK1 on the Staff stations is programmed with the standard event trigger 9534 (feature 52, Event Trigger - Without Tone). The programmed event toggles a UDD, and also switches the red LED in the same DAK on/off. All IP stations have the VAD function inbuilt in their software. In this application the VAD is enabled on all Nursery stations. When the station microphone picks up sound according to the settings in VAD, it will trigger DAK5. In the AlphaCom Event Handler there is an Station Input or Station DAK key event programmed to check a UDD before sending a mail to the Staff stations. If the UDD is off, no mail is sent. But if the UDD is on, then the Staff stations will recieve a mail message saying that VAD is activated in that particular station. The mail is sent to a group, and by using the group delete flag the mail is removed from the other Staff stations when one of them deletes it.

This event will be triggered when UDD 600 is enabled and when one of the Nursery stations picks up enough sound to activate DAK5.

To enable the VAD function access the inbuilt webserver for each IP station that should monitor sound. Once logged in, navigate to VAD under Advanced. Change the VAD status from Disabled to Enabled. Here it is also possible to change the audio level and duration before activation. The DAK key to activate is also selectable, but default is 5. 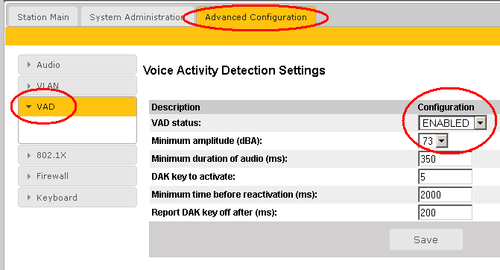