With the introduction of Advanced Output Handler in Turbine SW version 4.11, it is now possible to better customize the relay/GPO handling to your preferences.

Output actions set by events have a priority/queue so that multiple actions on the same output is possible, but only one action can be done at a time.

The action will stay until it is cleared when the event ends and some other action has priority.

For example if the output is configured to be slow fash during call, fast flash during registration failed and off during idle. If we then have an ongoing call and registration fails, the output will be slow flashing untill the call has ended. After the call has ended, the output will be fast flashing untill the station is registered again, which makes idle action active (the relay should then be off).

If the output is set by DTMF it will stay set until some other event makes the output change state. 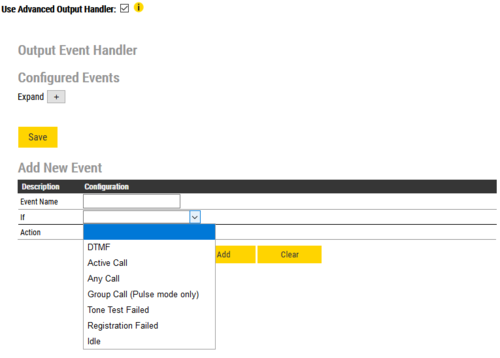 Will trigger an event on received DTMF. The action will stay on until next event happens.

The station may in some situations have multiple calls, the active call is the call which has media/tone handling.

Can be filtered so it will only trigger event on certain conditions.

If the state In Call is selected, the output will stay set until the call has ended.

May match any call. Can for example be used to indicate that a call from a specific station 100 is calling.

Can filter so it only triggers the event on

If the state In Call is selected, the output will stay set until the call has ended.

Event is triggered if the group call is active.

Event is triggered if a tone test has failed. The output action will be cleared on tone test sucess.

Event is triggered when station goes back to Idle.

Action can be either to control Relay or Output, and multiple IO's can be controlled in the same Event.

States can be same as in basic relay handling: steady off, steady on, slow flash, fast flash and timed steady on. 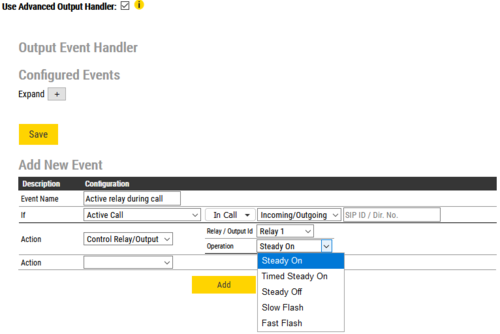 In this example the Relay will only be triggered if the station is in or attempting a call to the number 911. 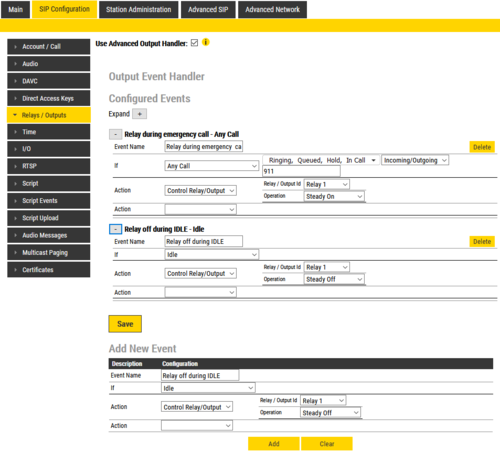