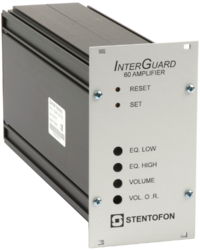 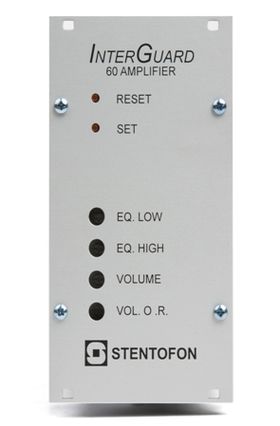 The InterGuard 60 W Amplifier is available in two versions, for 100 V and 50 V loudspeaker lines.

Areas of Use - Features

The amplifier is intended for use with AlphaCom exchanges for distributing voice evacuation messages, information calls, background music or any other audio signals.

Because the AlphaCom is a wide-bandwidth audio switch, it is well suited for routing high-quality audio to output subscriber lines. The IG60 input is then connected to the a-b subscriber pair and the amplified audio is distributed out on 100 V rms. or 50V rms. loudspeaker lines.

An additional separate AUX input is available on the IG60 for direct connection of radio tuners, CD players, etc.

A Volume Override facility is provided for messages that need extra attention.

The Loudspeaker Line Monitoring detects changes in loudspeaker load and reports the errors by means of LED indicators on the amplifier. It also shorts cd-wires, and sends a general fault message as well as a signal to the internal line error relay driver. The amplifier also monitors its own functions and performs a controlled shutdown at over-temperature.

It reports any amplifier errors by means of LED indicators, sends a general fault message to the AlphaCom exchange and operates a relay driver that can be used for automatic changeover to a standby amplifier.

The connection options are:

As an intercom station
The amplifier is connected to the abcd-wires in an AlphaCom exchange in order to amplify the audio on the subscriber lines. The exchange sees the amplifier as a subscriber station.

The amplifier can further be connected to the cd-pair. This serves two purposes:

One cd-pair can have up to 21 amplifiers connected in parallel, but only one amplifier can terminate the cd-loop (Set switch S6-2 ON).

→ You can connect 21 amplifiers in parallel to an AlphaCom exchange. Note the following limitations:

Remote control of Amplifier
The audio on the ab input can also be switched on by the AMP_ON remote control signal.

The IG60 can also be used as a standalone amplifier when connected to the AUX input. Set the line monitoring to occur only once every 24 hours.

The AUX input is 600 ohm. Several amplifiers in parallel may overload the source.

If all audio input and control options are used, the audio priorities are:

The amplifier has two controls labeled “volume” and “vol. override”, as well as bass (EQ low) and treble (EQ high) controls. All four are accessible at the front.

Normally, both a-b wire and AUX signals are amplified as set by the VOLUME potentiometer. To obtain different output levels, the output signals from the different audio sources must be adjusted.

When the external “vol_overr.” control signal is activated, the volume is set by the VOL. OVERRIDE potentiometer. The volume setting applies to both a-b wire and AUX signals.

Below is an application example of how the volume override function can be used:

Very low audio (background music, etc.) from one source is interrupted with loud audio (voice messages) from another source. Both music and messages come from the AlphaCom’s ab-pair. The music can then use the (normal) VOLUME potentiometer, set at low gain, while the messages are accompanied by an external “vol_overr control signal” that switches to the VOL. OVERRIDE potentiometer with high gain.

At the front you will find the following controls and indicators:

Through the holes for the potentiometers on the front plate, you can see 7 LEDs which are used for status and error reporting. The LEDs are also used for indicating values during commissioning.

The potentiometers are accessible through holes in the front plate for adjusting:

The potentiometers are accessible through holes in the front plate for adjusting:

The reset key restarts the internal processor. An automatic line-test is performed after each reset. The reset signal can be triggered via an external input which makes it possible to activate the reset function from a central control room. In conjunction with the set key, the reset key is also used during commissioning of the amplifier.

The set key is used for programming and for setting new line impedance references.

The keys are behind the front plate and can be reached with a thin pen.

The LEDs are hidden behind the front plate, but the light can be seen through the potentiometer slits.

It is possible to use the amp_error relay and/or line_error output as an RCI input to the AlphaCom exchange. In this way, for example, a text message can be sent to a station when there is an error on the amplifier.

The AUX input wires have no monitoring.

Reference impedance for line monitoring, time between line tests and error detection limits can be programmed at the amplifier. The set and reset keys in the front panel are used for the programming.

The amplifier has 2 line monitoring modes with different error limits. It is also possible to adjust the time between the line tests. The default settings are 5 W mode and 20 seconds.

the amplifier detects loudspeaker load errors of 5 W or more. The time interval is 20 seconds.

the amplifier detects loudspeaker load errors of 15 W or more. The time interval is 20 seconds.

When used as a standalone amplifier, the line monitoring can be is set to occur only once every 24 hours. But it will still monitor the line and display errors by means of LED indicators.

The amplifier checks internal references and the temperature of the output stage. If the amplifier detects an internal error it will report amp_error with LED and relay driver output, but still try to operate.

If the amplifier detects overheating, it will report amp_error and turn on the over_temperature LED and shut down temporarily to cool off. It also operates an output for changeover to a possible standby amplifier.

Shortly before the amplifier goes to shutdown it will reduce the output level with 50% and start flashing the over_temperature indicator.

The amplifier can detect a shorted line, open line, load error, or ground fault. The faults have different detection ranges; see below.

The amplifier will report both amplifier and line errors in three ways.

An output signal provides the possibility for automatic changeover to a standby amplifier.

The amplifier has two open collector relay drivers that will deactivate during errors and if the amplifier loses power (line_error and amp_error). By connecting external circuits you can report these errors, for example to an external lamp, or send a text message to an AlphaCom station.

The reset signal can be triggered via an input which makes it possible to reset the amplifier from a central control room.

A detachable plug at the back provides connection for both AC and DC input. The plug has separate connections for AC and DC, e.g. a standby battery, but they can not be used at the same time.

When the amplifier is in standby, the green power-on indicator is turned on.

When the amplifier is active, the green power-on indicator flashes. A yellow clipping indicator may flash occasionally if the output signal is too large.

In both standby and active operation, LED indicators may report line errors and amplifier errors.

During normal installation and commissioning it is not necessary to open the amplifier.

In this application the InterGuard 60 W is connected as an AlphaCom station. 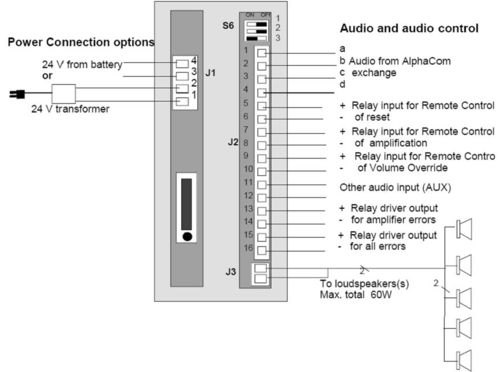 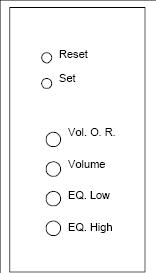 
Through the holes for the potentiometers on the front plate, you can see 7 LEDs, which are used to indicate programmed values.

The line monitoring is based on a 20 kHz test-tone, with an output level of 35 Vrms. for 100 V lines and 17 V rms. for 50 V lines. The monitoring circuit then measures the output voltage, current and phase and calculates the impedance.

The load change error reporting is based on relative impedance changes. This makes it possible for the amplifier to track small changes and avoid false errors. In addition, both standard and rough mode have an absolute impedance change limit, which also gives a load error (safety backup).

The amplifier will always continue to work, regardless of the errors displayed. The exception is controlled shutdowns due to overheating.

The SET and RESET keys in the front panel are used to program:

Load - This is a line test which measures the line impedance, or loudspeaker oad, and then stores the result in the amplifier’s non-volatile memory.

Time - this is the line monitoring time interval.

NOTE: The keys are behind the front plate and can be reached with a thin pen. Be aware that the set key lies deeper than the reset key.

NOTE: The term “toggle” is used instead of “push and release” a key.


SET LOAD
Before the amplifier can be used, you need to do SET LOAD programming. Once this is performed, the amplifier is operational. If loudspeakers are added or removed later, the line impedance will be changed. A new SET LOAD must then be performed, otherwise load errors will be reported.

Set Time and Mode
When the Set Load has been performed, the amplifier is ready for use with the default settings for time intervals during line monitoring and in standard mode. If you want to change the mode and the time intervals, do the following programming:

Set up an alarm call to the amplifier and adjust the volume for volume override output.

Behind the upper front cover there are 7 LEDs, which are used for error indications. The LEDs are visible through the holes for the potentiometers.

Amplifier errors
The amplifier checks internal references and the temperature of the output stage. If the amplifier detects an internal error, it will report amp_error with LED and relay driver output but still try to operate.

If the amplifier detects overheating it will report amp_error, turn on the over_temperature LED and shut down temporarily to cool off. It will also deactivate a relay driver for changeover to a possible standby amplifier.

Shortly before the amplifier goes to shutdown it will reduce the output level by 50% and start flashing the over_temperature indicator.

The amplifier reports both amplifier and line errors in three ways.

Shorted C-D wire
The amplifier can short the cd-pair for 60 sec. and thereby send a “general fault” message to the exchange. The c-d wire will also be shorted if the amplifier loses power. The exchange must be programmed to send an alert to an operator station when such a condition occurs. The operator will only receive a “general fault” at a specified position, and must visually inspect the error LEDs at the amplifier to find the exact fault.

The short can only stay on for 60 sec; if it stays on longer the exchange will flag the line as “out of order” and refuse to set up new calls to that position.

When the amplifier is flashing all LED indicators, it has no loudspeaker line reference impedance and will not operate. 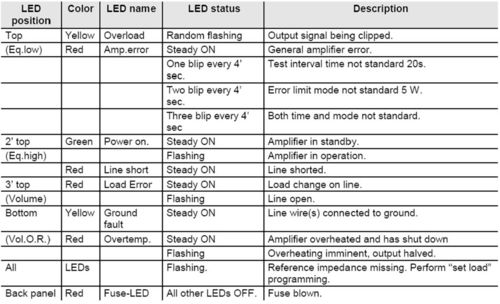 Line error checking
The indicator LEDs in the front will show the error type. An open, shorted or grounded line is best fixed by detaching the line connector and doing troubleshooting. Connect the line again and wait for the next line test. The error LED will turn off if the problem is solved.

If the fault is load error, there has been a change in loudspeaker load or line length. Try to localize any defective or disconnected loudspeakers. If any are found, correct the problem and wait for the next line test. The error LED will turn off if the problem is solved.

If the error occurs after a planned change of loudspeaker load or line length, a SET load programming must be made to update the reference impedance. See the programming section.