When a PC is connected to the AUX port of an IP Station, all data traffic to and from the PC goes via the IP station. When dowloading large amount of data to the PC one can experience choppy audio in the station, or in worst case the station might reset.

PC connected to the AUX port of the IP station

By using the VLAN settings in the station, it is possible to route traffic from the AUX port directly to the LAN port.

Log on to the web interface of the station. Select Advanced Network -> VLAN.

First step is to add a VLAN with the LAN port and the AUX port as members. Here VLAN Id 10 is used as an example (The VLAN Id is not important as long as two different ID’s are used):

Second step is to add a VLAN with the IP station port, LAN port and AUX port as members. Here VLAN Id 11 is used as an example:

Third step is to set "Enable VLAN" = Yes, and specify the VLAN rules as shown in the picture below. 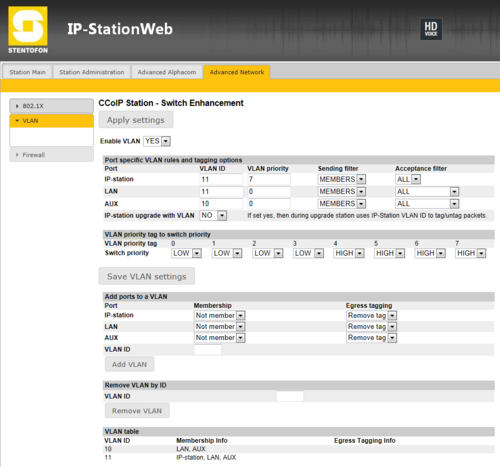