To have multiple zone selection and only audio line from ICX-system to the Vipedia system an IP-LCM is used. This article will describe three use cases with their needed wiring and event configuration.

In this way you can select different zones in the ASL system by calling different group calls. The IP-LCM must be a member of all group calls used.

To use the IP-LCM with the ASL Vipedia it is recommended that you use the BMB01. Using the BMB01 will save the GPIO on the Vipedia. One BMB01 and one IP-LCM can be mounted next to each other on a DIN-rail and fits within 19 inch. The audio line output of the IP-LCM is directly connected to an audio input on the Vipedia.

Wiring the BMB01 inputs to the relays of the IP-LCM

To wire the relay contacts of the IP-LCM to the BMB01 you need to take the 0V OUT terminal (#1) of the BMB01 and connect it to all the COM connections of the relays you want to use. Then depending on whether you want Active High or Active Low take either the NC of NO side of the relay contact and wire it to the input terminals AI1 to AI8 (#2 to #9). If you need to monitor the connection we refer to the ASL documentation. 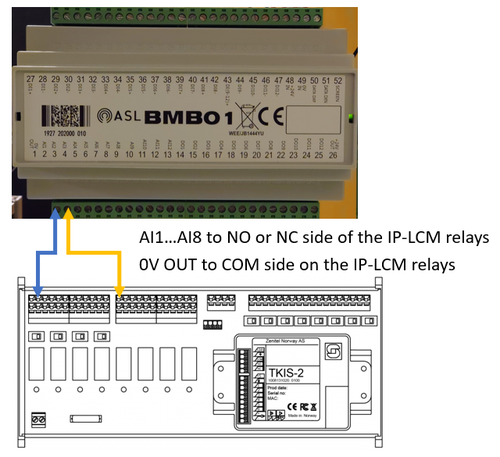 The connection of the relays

Take a shielded CAT5 patch cable and strip the end. You can remove all pairs except the orange pair. The white/orange wire connects to the (+) side of the audio output on the IP-LCM and the orange wire to the (-) side. The RJ45 connector on the other side of the CAT5 patch cable can be directly inserted into the correct audio input on the Vipedia. 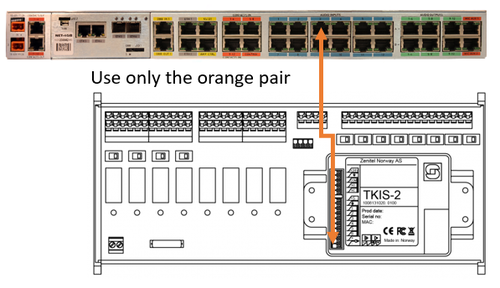 The cabling of the audio output

In the example below the: 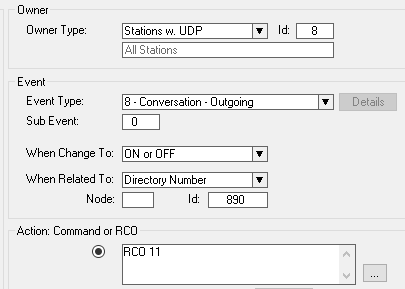 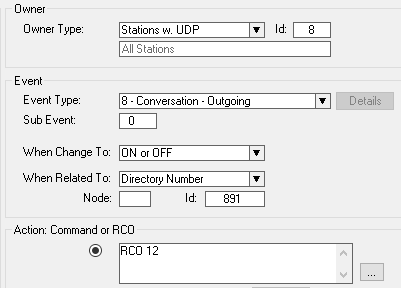 The logical RCOs 11 and 12 must be mapped to the physical relays of the IP-LCM. This is done in Exchange & System > RCO table.

In the SCT (System Config Tool) the BMB01 inputs will be setup with fixed routes on the Volt-Free Contacts. The RCO that is triggered on the IP-LCM is connected to an input of the BMB01. By using a Fixed Route the Vipedia will then set up a correct route to the outputs and zones.

Four of the BMB01 inputs are configured with fixed routes

The Route will be configured from the audio input that the IP-LCM is connected to to one or more audio outputs. 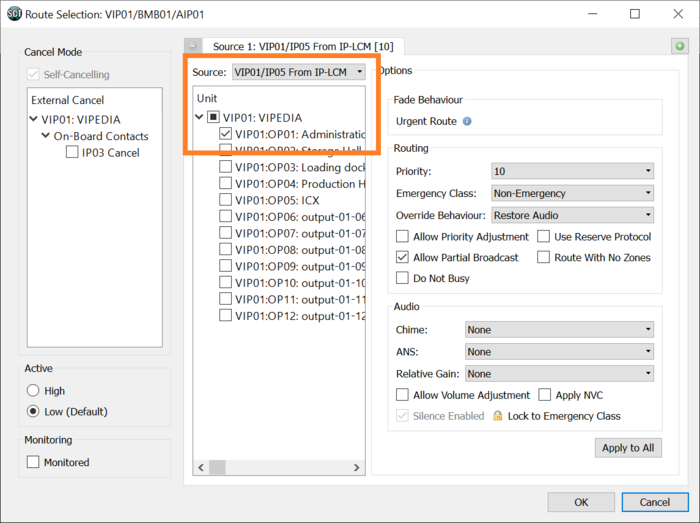 With dynamic zone selection you each button on a ECPIR or DAK panel toggles a relay on the IP-LCM. these select routes in the Vipedia. The PTT button then sends the audio to the selected routes.

In Users & Stations, select the ECPIR panel from the listbox. Under the UDP tab, enter the physical number of the IP-LCM module to be controlled by this ECPIR panel. 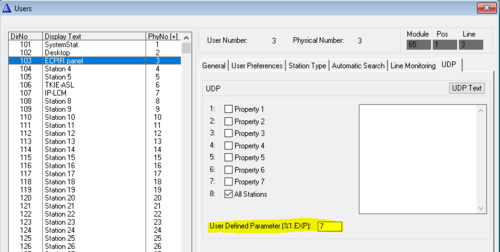 For the dynamic zone selection to work you need three events to be programmed. 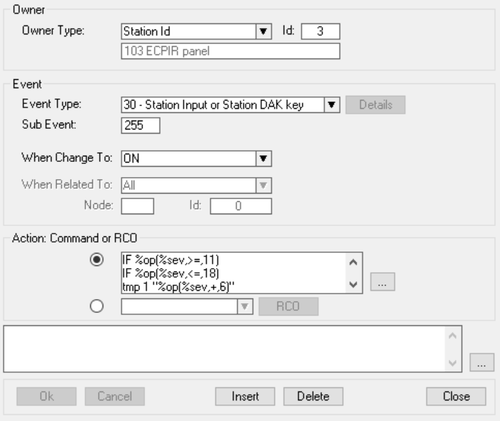 When the PTT button is pressed, this event will dial a group call. The IP-LCM must be a member of this group. When the button is released the call will be cancelled. 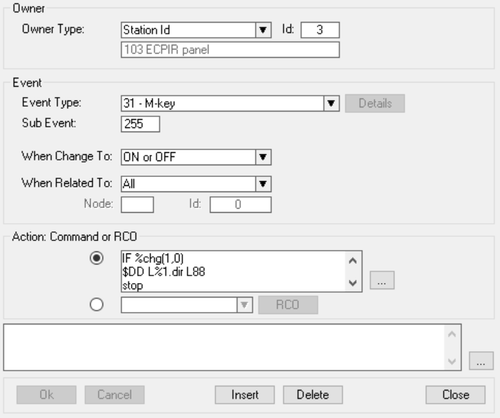 Dial group call 88 when PTT is pressed, cancel when released.

The third event checks the status of the IP-LCM relays when the groupcall starts. The corresponding LED's on the ECPIR panel will go from blinking to steady lit. When the groupcall ends all relays and LEDs will be turned off. 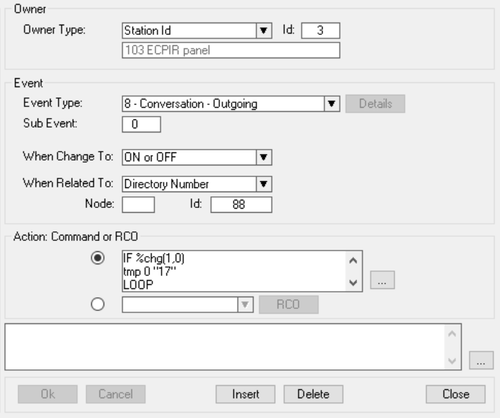 The input of the BMB01 have to be configured to select the appropriate routes. In the tab Volt-free contacts you choose for every input you use "fixed route".

And under the button Routing you set up the route configuration. 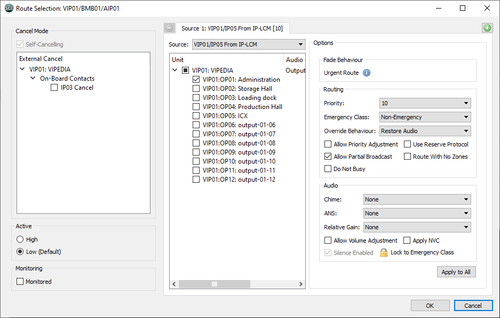 Feedback to ICX-AlphaCom on selected zones in ASL

To get feedback into the ICX-AlphaCom what routes are selected in the Vipedia you need additional wiring from the outputs of the BMB01 to the IP-LCM inputs.

Wiring the BMB01 outputs to the IP-LCM inputs 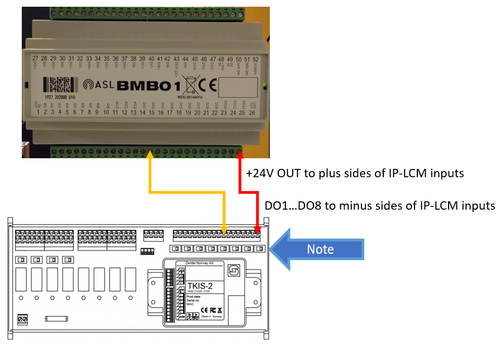 The wiring of the inputs

There is only one event to be configured in ICX-AlphaCom that is triggered by the inputs of the IP-LCM. 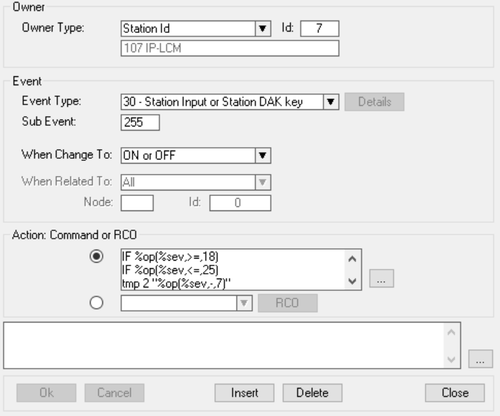 In the Vipedia the outputs of the BMB must be configured to be active when a zone is busy. 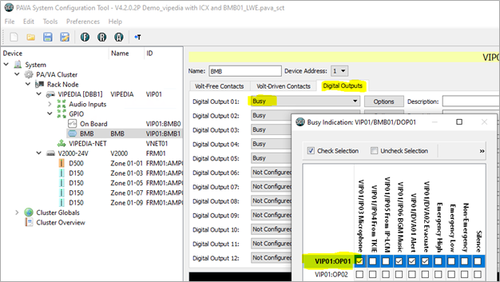 The outputs of the BMB
Retrieved from "https://wiki.zenitel.com/w/index.php?title=Integration_with_ASL_PAVA_using_the_IP-LCM_unit&oldid=229266"
Categories: