By default all stations are included into UDP group 8. UDP groups 1 - 7 are empty. With UDP based rules, you will usually need to use the "context parameters" %1 and %2 to refer to the stations which triggered the particular instance of the event.

How to include stations in an UDP group 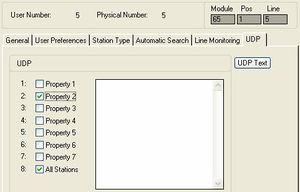 Station 5 included in UDP group 2 and 8

UDP groups are edited in AlphaPro. From the main menu select Users & Stations > UDP tab. Now select which UDP group(s) the station should be included in.

A descriptive text can be assigned to the UDP group by selecting the [UDP Text] button, and modify the default texts.

UDP groups was made a separate concept from the groupcall station groups due to performance reasons. Performance was a major design constraint on the original MC68000 based AMC board. UDP membership is stored as a single byte per station. One bit for each UDP membership. So in order to test if a incoming station event matches a UDP rule, the EventHandler just needs to do a bitwise AND of the UDPs of the Event and the Rule. This also makes it easy to work across exchanges in AlphaNet. The UDP bitmap for the calling station is just copied to the payload of AUDIO_PATH_SETUP (param#13).

Groupcall groups are on the other hand stored as bitmaps the other way, an array of groups, each element is a bitmap of the member stations. And there is a large number of groups (currenly 100). This would complicate both Eventhandler matching, and handling in AlphaNet, if EventHandler was to use groupcall groups.