The Hardware watchdog can operate in two timing modes:

The bootloader will set the HW-Dog in 60/10 mode before launching the linux boot. The watchdog will not be tickled during linux boot process, but it is given a 60 second timeout.

When the System Monitoring Process (see below) is launched the mode is changed to 3s/3s. When the AlphaCom System is running the wdog is tickled once each second.

A software reset is performed using linux runlevel system. The resources that is stopped and started again are in order:

The resources are started again in the reverse order.

The amcd will monitor its own resources like rtp, sip etc. If any of these resources fails the amcd will iself try to soft reset them. If the amcd is not able to get the resources back up running, it will stop alive signalling the amc_ip_cmd_srv and the monitoring process described above will take over.

After a system reset the amcd will get some extra time before validated as 'dead': 25 seconds

The Soft reset process is triggered when no signal from amcd within 5 seconds. If the amcd do not report back after another 20 seconds after the soft reset was initiated, the Hardware Watchdog toggling is stopped. The Hard reset should kick in within 3 seconds.

If the soft reset did not work the message before HW reset will be:

In addition a system process state dump (ps) will be written to the file '/opt/nvram/amc_reset_ps_dump.txt' before a hard reset. 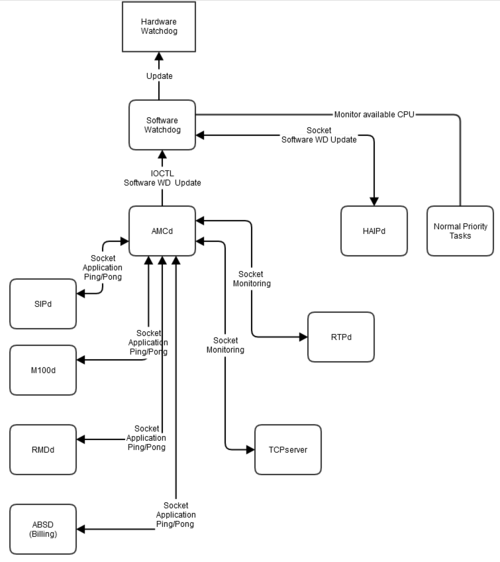 With reference to the above drawing, there is a hierarchy of monitoring:

The AMCd (intercom) application is monitoring:

If the AMCd detects that one of its underdeamons fails, each of these will be restarted by AMCd.

If one of these fails, the AMCd will restart it self, and a larger software restart will be executed by the CMD server, as described below.

The software watchdog process (CMD server) is updating a Hardware watchdog. The CMD server monitors the AMCd and the HAIPd (Redundant server application), and it checks if regular tasks like Web, console etc are getting CPU resources.

If AMCd or HAIPd fails, they will be restarted by the CMD server.

A restart of AMCd will result in a restart of all above mentioned underdeamons. If a restart of AMCd is not successful, the CCMD server will after 60 seconds do a reboot of the Linux OS, and stop updating the hardware watchdog. HAIPd will be restarted without doing a full reboot.

If all CPU resources to "regular" tasks are used over a longer time period, it is assumed that an underlaying process is looping and is using all CPU but still able to update the software watchdog, and the AMCd will be restarted. If this doesn't help, there will be a reboot of the Linux OS.