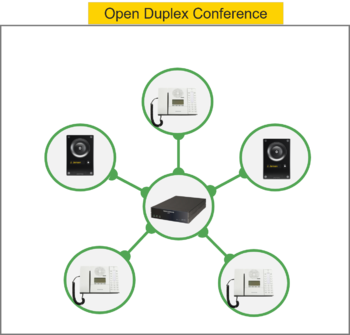 The core of the duplex conference is audio mixing. Each participant's loudspeaker gets the audio mix of the microphone signals from the other participants. This is called a conference bridge. An IP station and an analog station with handset lifted will be connected to the conference bridge in full (open) duplex. An analog station in loudspeaking mode will be connected in voice switched mode, and will require one "speech channel" (i.e. one ASLT or ATLB board per participant).

Transfer from conversation to "ad-hoc" conference

Transfer from a two-part conversation: Dial “56” during conversation. An unused “ad-hoc” conference is allocated, and the two stations are transferred to the new conference.

In case of an inquiry call from a parked conversation, all three stations will be transferred to an “ad-hoc” conference. Both ends of the open conversation can initiate the transfer by dialling “56”. This is probably the most natural way to establish a conference.

Care has been taken to ensure that also calls that involves SIP Stations can be transferred to an ad-hoc conference. (No disconnection message during the transfer.) Calls to or from SIP Trunk can currently (AMC sw 12.3.3.1) not be included in an ad hoc conference.

Direct inclusion from within conference

Expand a conference: A participant in a duplex conference can include other stations into the conference: Dial

The dialler immediately goes back to the conference after terminating the dialling.

This is a “raw” setup function. Transfer and absence status of the target stations are ignored.

Inclusion by inquiry call from conference

Expand a conference: A participant in a duplex conference can also make an inquiry call to a station, and ask if somebody there want to join. If yes, dial “56” to transfer the inquired station to the conference. The dialling station returns to the conference as well.

If the answer is no, or no one respond to the inquiry, just press C and the dialler returns to the conference.

With the inquiry method, transfer, private and absence status of the target station is followed.

This feature disconnects specific stations from a duplex conference. Dial from idle:

These options can be set for each duplex conference:

The conference priority controls the priority of resource allocations.

If set to the highest (alarm) priority, the conference can snatch resources from other stations/functions. Busy stations will also be disconnected from normal priority functions in order to be included in alarm-priority conference.

There are two different messages for forcing stations into a conference: ODC and CALL. Other Data Protocol Messages for Open Duplex Conference includes: OD_CONF_ENTERED, OD_CONF_LEAVE, ECL_O_DUPL_CONF.

Null value or directory number for “duplex conference off” disconnects the subscriber or group from the conference. Response is “COMMAND_RESPONSE” or ILLEGAL_PARAM.

Set up a conversation like dialing from a station: Dedicated message: CALL_SETUP:

The response is COMMAND_RESPONSE. But the response is only transmitted if bit one (“RETURN_ACK”) in the setup-flags is set (append “w1” to the message).

$CALL also support inclusion of station into a conference in another exchange over AlphaNet.

The entity class ECL_O_DUPL_CONF = 15 is defined for duplex conferences, letter “f” in the “simple linklayer”. So if you don’t want to depend on directory numbers, you can send:

which is the equivalent of

The Open Duplex Conference mixing is handled by the AMC-IP card. Depending of the type of station, and the condition of the station, the resource usage can vary. An ordinary analogue station in loudspeaking mode will use one speech channel (one ASLT or ATLB resource). Lifting the handset on an analogue station switched the station to Full Duplex, making the resource usage change from the ASLT/ATLB to the AMC-IP, thus releasing one resource for stations without handset. IP stations is by default Full Duplex and will always get their resources from the AMC-IP card.

The new duplex conference do the mixing in the DSP of the AMC-IP board. No AGA board is required, neither any AlphaPro configuration. This means that the conference audio is limited to 7kHz bandwidth, also for internal members.

The DSP conference mixing is quite simple and efficient. For each 16kHz period:

In a MultiModule only the AMC-IP in the Master is used for the mixing.

An important change is local ASLT/ATLB stations use a Line Echo Cancellation (LEC) resource when going off hook. This is required so that members connecting via IP do not receive annoying echo. Another positive effect of using LEC is that it reduces the risk of "howling" when having many offhook members in a conference.

So there can never be more than 32 simultaneous participants in total in an exchange. (This matches the capacity for 2 AGA cards only used for conference mixing). The actual number of participants will most likely be lower, see the following points:

Open Duplex Conference prior to AMC 10.50

The old AGA based conferencing is still available as it was on prevous versions in the AMCD SW. In order to switch back to the old mode, a flag can be set using the TST#NVRAM_editor:

The behaviour of the 83xx conferences was changed with the introduction of vox-duplex. If there is a need to enforce the old mode; only low speaking mode using handsets, this can be achieved by setting the system wide nvram flag:

The autoload value is zero, allowing use of vox duplex. So normally there is no need to change this flag.

This flag is currently not accessible in AlphaPro, the “nvram” command must be used in “TST-console”.

Conferences 15 to 20 are by default used for transfer from call to ad-hoc conference. This is controlled by the NVRAM flag

Prior to AMC 10.00 this flag was unused, and autoloaded to zero for all conferences. With AMC 10.00 the anonymous flag is set to “1” for conferences 15 to 20 during autoload.

If the ”dupl_conf_no_vox” nvram-flag is set: Vox duplex is not allowed. When a station is included into a duplex conference, it will start to ring, and the handset has to be lifted in order to connect to the conference audio. If the handset was lifted in the first place, the station is connected to the conference audio directly. The timeout on the ringing is default 30 seconds, the duration is controlled by the same programming as normal private ringing.

This flag is currently not accessible in AlphaPro, the “nvram” command must be used in “TST-console”. Normally there is no need to change this flag. However:

If upgrading from an early X-version of AMC 10.00, you have to either set the anonymous-flags manually, or do a cold-start of the AMC board. Otherwise transfer from call to ad-hoc conference will not work.

AGA board and programming

In AMC versions earlier than 10.50 the duplex conference requirer proper installation of an AGA board.

All audio mixing take place in the Master module. At least one AGA board is needed, and some AGA resources must be programmed to “2 Open Duplex Conf Mixer” in the “Board” programming. (Each “port” defined in AlphaPro makes two mixer circuits, each 1/16th of AGA).

The figure shows an example of 4 participants in a conference, using AGA resources to perform the conference mixing.

The hardware for conferencing will initially be an AGA board, where each of the 16 bi-directional channels have 3 subchannels (timeslot selectors, like each subscriber on an ASLT). This means that 3 timeslots can be listened to, and the sum is returned in a 4. timeslot via an on-board loop. The figure is a simplified representation of use of timeslots. 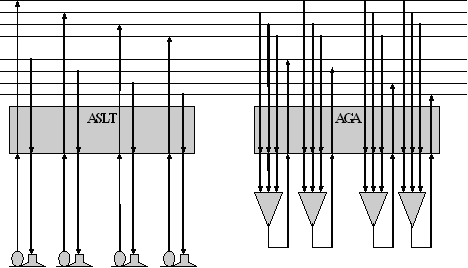 Conference mixers only used in Master

Audio from members transported on IP, is routed via the backplane before entering the DSP for mixing, and vice versa. This applies to slave-modules, AlphaNet callers, IP stations, SIP clients etc... This wastes two PCMC resources for that member. The total number of PCMC resources are 32. This means that 16 IP stations in Duplex Conference will use up all PCMC resources, and block any other VoIP calls. The audio is also converted unnecessarily to SigmaDelta from PCM and back.

For future versions it should consider to optimize this, so that the decoded VoIP audio goes directly to the conference mixer. Saving two PCMC resources and avoiding unnecessary transcoding. However, this requires some careful changes of the AMCD SW.

Recording of conversations using Duplex Conference and AGA board