The Recall function let you record a message from a station, and then dispatch the recorded message as a Group Call, effectively preventing possible feedback problems.

The AlphaCom has a mechanism “Voice Paging Exclusion” where up to 8 neighbour stations will be removed from a group before audio is set up.

It’s possible to adjust all speaker levels down somewhat. This means that both conversations and group calls will have a moderate volume.

This feature is available from AMC 08.03 (May 2000). It may require additional AGA boards. It works for single-module and multi-module exchanges, and in AlphaNet.
NOTE: Also slave modules must have new software!

The AlphaCom don’t connect a microphone directly to the backwiring timeslot that feeds the Group Call. Rather, the microphone signal is feed via a duplex scanner channel on ASLT so that the fader function of the SBI can be used to avoid clicks when the station M-key is pressed / released (microphone is connected).

A similar SBI hardware is available on AGA boards also. In addition, the signal can be routed via the potentiometer of the channel by closing Sn1. The AMC software substitutes AGA channels for duplex scanners so that we have a way to adjust the microphone sensitivity during the problem functions only.

Use of AGA ports

Possible AGA ports to use:

In high traffic exchanges with two AGA ring boards, a reduction from 16 to 14 channels will not be noticeable for the users. NOTE: The ring wires must be cut (not connected)!

The current implementation requires the attenuator hardware to be in the same module as the microphone feeding the group call (due to efficient use of the audio ring). The “Board” table in AlphaPro only allows configuration of AGAs in the master module. This means:

If no attenuators are available (all in use, or no AGA in this module), the Group Call will be set up using a standard ASLT scanner.

The exchange will modify its Group Call set-up automatically if there are attenuator resources available. Commissioning is simply to tell the exchange that some AGA ports shall be used as attenuators. (Resources become available after reset of the exchange.)

All attenuators must be adjusted to give identical attenuation. The [[AGA] line level test feature 7872 has been extended to cover attenuators also. 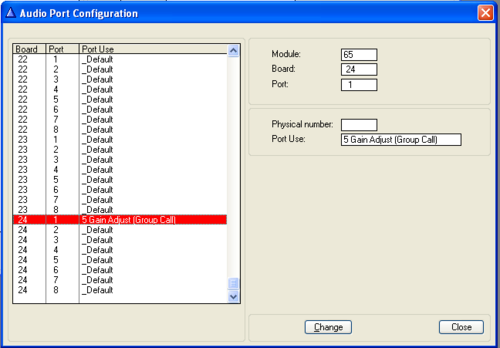 Procedure to set all attenuators to the same value

NOTE: The station used during commissioning of levels must be in the same module as the AGA board being adjusted (similar to adjustment of multi-module ring audio). 7872 connects a 500 Hz tone to the attenuator input, and a level scanner to the output. The display shows the level measurement plus the port address, much like AlphaNet channel display. (The audio switches between full and attenuated tone, this is a side-effect of the general function of the 7872 AGA adjustments for AlphaNet lines)

There are quite a few AGA boards where the input/output levels are unbalanced due to a production error, and these boards will be adjustable within 70 to 150, which probably will be of no use….