Amplifier faults, such as Speaker Line errors, can be reported to display stations

Faults in the ENA Amplifier can be reported to a display station, e.g. to IP Desktop, DualDisplay or CRMV station. This is achieved by using event 43 - Station Fault Report, which is triggered whenever the ENA amplifier reports a fault. It is the directory number for Audio Channel 1 which is reporting faults.

In order to have one common event for all ENA amplifiers, include the amplifiers in an UDP Group. Here UDP Group 3 is used as an example.

In AlphaPro, select Exchange & System > Events, and Insert a new event with the following properties: 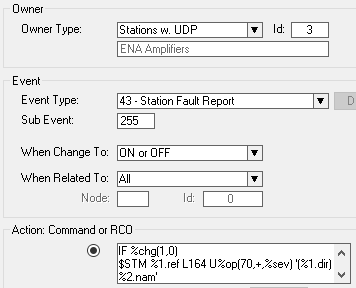 The event string will send a station-mail ($STM) to station 164 for all new fault codes. When a fault is removed the event is reported "OFF", and the mail message is automatically deleted. ($CANM). If you want the mail message to remain in the station also after the fault is gone, simply change "When Change To" = ON (not ON or OFF).

The priority of the mail will be the fault type (subevent) + 70. The mail text will contain the directory number of the amplifier and the default fault text. Customized fault text can be used instead of the default text.