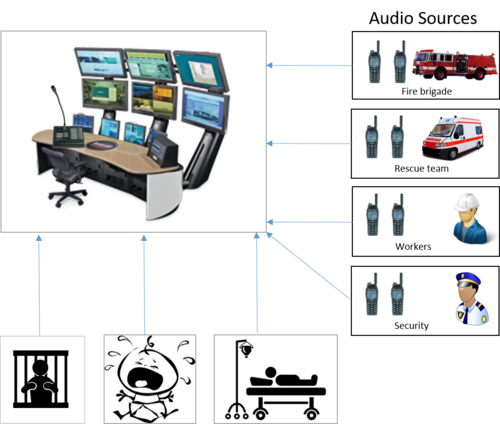 The MultiConference is a feature in the ICX-AlphaCom and AlphaCom XE systems, that makes it possible for operators to listen to multiple Audio Sources in a mix. The operator can talk back to individual sources, or to all sources in one go.

There is an alternative mode of operation called Work Channel mode. In this mode the operator selects one particular channel for talkback, the other channels are being monitored only. See Work Channel mode for more details.

Operator Stations can be a combined controller and mixer, or work as a controller only, and the mixing is done in a separate device (e.g. an IP Speaker)

These stations can mix up to 6 channels. However, it is an option to do the mixing in a separate IP device if that is more convenient, such as an IP Speaker or a TKIS-2 kit. In that case the operator station is acting as a Mix Controller only, and the audio mixing and audio playback is taking place in the separate device.

There can be up to 100 different audio sources defined. Audio Sources are defined as Default Speaker in individual Simplex Conferences. Any Zenitel IP Station device can be an Audio Source.

It is recommended to always use the latest version.

The Operator Station consists of 3 different elements which needs to be configured:

The association between the elements is done by simply making certain that Mix controller, Mixer and Mixer Channels are assigned to subsequent physical numbers.

The number of mixer channels to use is defined in the station web interface of the mixer device. 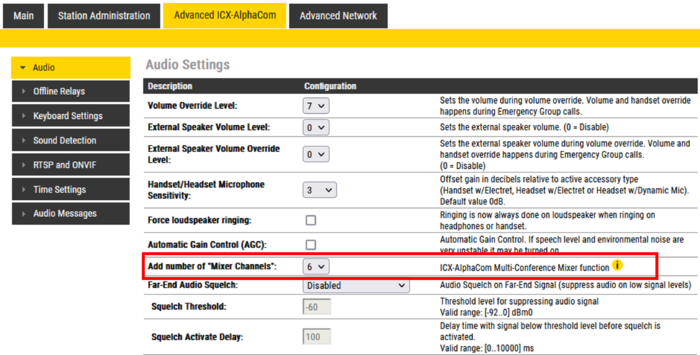 Simplex Conferences that are used for MultiConference, require some parameters to be modified.

In AlphaPro, select Directory & Features and scroll down to Simplex Conference (feature 65).

For each conference in use by the MultiConference feature, set:

Modify the properties of the Simplex Conferences in use

Define a Default Speaker (= Audio Source) for each Simplex Conference in use.

In AlphaPro, select Simplex Conference button, and set the audio source as Default Member, and enable the Default Speaker flag: 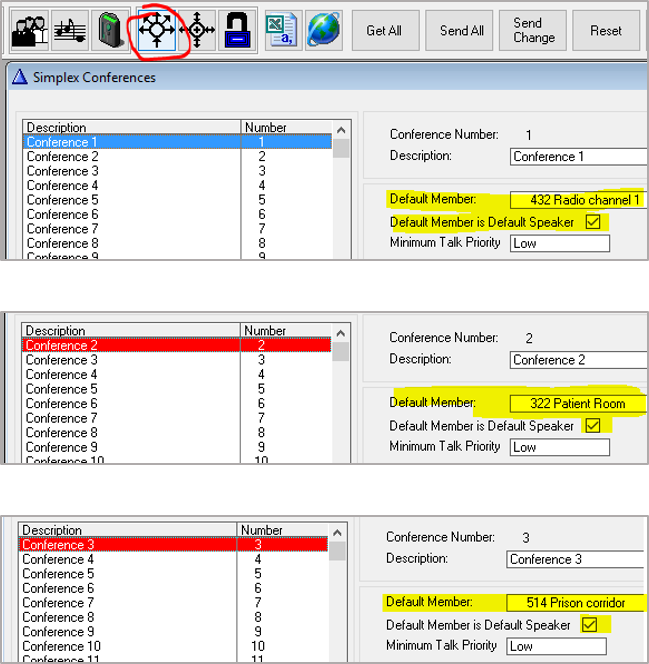 If the Audio Source is an interface to mobile radio (e.g. TKIE-2 unit), there is a need to operate the relay of the TKIE when somewhone does talkback into the simplex conference. The relay is used to key the radio transmitter.

In the example below the event (Audio event 1, subevent 64) is triggered when someone talks into the conference, and will trigger output 7 (= the relay) of the TKIE unit with directory number 432. 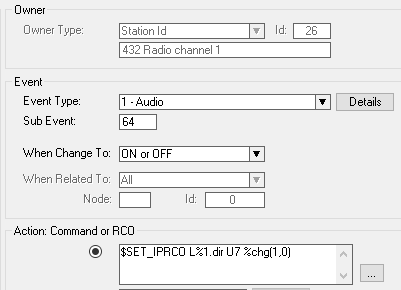 One have to create one such event for each TKIE unit.

Directory numbers used by the MultiConference feature are included by default, you simply need to assign directory numbers to the DAK keys as wanted. The LEDs in the DAK buttons have a default operation, which can be altered.

The DAK keys are configured from AlphaPro, in Users & Stations > DAK window. Below is an example of DAK configuration on an ECPIR Panel:

Note: Directory numbers are included by default as from AMC 12.3.3.2/AlphaPro 11.6.3.11. If you are using a database created in an earlier version, you need to define directory numbers manually. See Multiconference#Directory_Numbers_and_their_parameters.

When listening to multiple audio sources, it can be hard to hear which channel the audio is coming from. One can use LED indication in the DAK keys to indicate which conference channel there is audio activity on.

The audio indication can be triggered by:

To configure the Sound Detection, log on to the web interface of the IP device acting as Audio Source, and select Advanced ICX-Alphacom > Sound Detection.

Enable the Sound Detection feature on the Audio Source

This will trigger "DAK 5" whenever sound is detected.

For a detailed description of each parameter, see Sound Detection.

Note that the sound detection feature during conference is supported from software version 4.7. The feature is not supported in INCA devices.

The $VOX command will trigger the event "16 - Simplex Conference Audio" on all stations which are active members of the specified simplex conference.

In the configuration above, the event is triggered by DAK 5 (= SubEvent 5). If a squelch signal is hardwired to an input of the Turbine device, change the Sub Event accordingly. (Sub Event 11-16 is used for input 1-6). 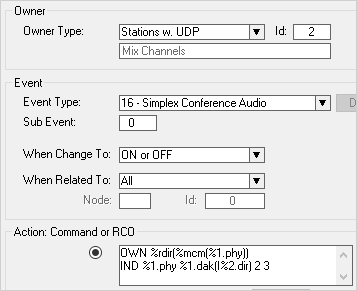 The above commands will cause the green LED in the corresponding DAK key to flash when audio is detected.

Feedback might occur between operators sitting close to each other, and are listening to the same conference channel

When operators are sitting close to each other, there is a risk for feedback when listening to same channel, and one of them is doing talkback to that channel. The operators may also experience annoying echo due to delay of VoIP audio.

By using the "Group Exclusion" feature, it is possible to prevent audio from being transmitted to nearby station(s) when an operator is doing talkback on the same channel as the neighbouring station is listening to.

When using Work Channel mode, the operator can monitor multiple conferences, and choose one single conference channel for TalkBack. When pressing the PTT button, talkback will be made to the selected channel.

The ICX-AlphaCom and IP devices should be configured as described in the previous paragraphs in this article.

Then the following modifications must be done:

Change the "Parameter 2" of the Conferences

In AlphaPro, select Directory & Features and scroll down to Simplex Conference (feature 65).

For each conference used by the MultiConference feature, set:

Modify the properties of the Simplex Conferences in use

Define a directory number for the "Work Channel" selection feature

In AlphaPro, select Directory & Features, and Insert a new directory number 7967 with the following parameters:

The Directory number used for Work Channel Selection (7967) needs to assign to a DAK key on the operator station.

Configure what LED to use for indication of "Active Work Channel"

One can define more than one mixer related to each Controller station. For each mixer (IP device, such as IP Speaker or VoIP kit) you add, you get 6 additional channels. In this way one can create a 12-mix system or a 18-mix system.

Directory Numbers and their parameters

(***) - Not included after Factory Default, must be added manually

Below are some tables for different scenarios, making it easier to understand the rules.

The total number of sources (= Simplex Conferences) and how many sources that can be active at the same time, depends on the hardware platform and software versions. The table below gives an overview: