The Distributed Automatic Volume Control (DAVC) is an algorithm which is using one or more microphones ("AVC Source") to measure the ambient audio/noise level, and adjusts the loudspeaker output level of the PA amplifier ("AVC Receiver") according to the ambient audio level.

The AVC Source is the input device with the listening microphone used for measuring the ambient noise level. This is typically a TKIS-kit or a TKIE-kit, but any Turbine Device with microphone can be used.

The AVC Receiver is the output device that is used for playing audio, typically an ENA amplifier, or a PA Interface TKIS-kit or TKIE-kit.

DAVC is not operating while audio is active on the AVC Receiver. With the default configuration, it needs minimum 100ms of silence to be able to adjust the gain by 1dB. This should work just fine with normal speech, but AVC will not adjust while playing constant music.

To configure the DAVC, log in to the web interface of the AVC Source or AVC Receiver, and select Advanced ICX-AlphaCom > DAVC Settings:

DAVC Settings in the web interface 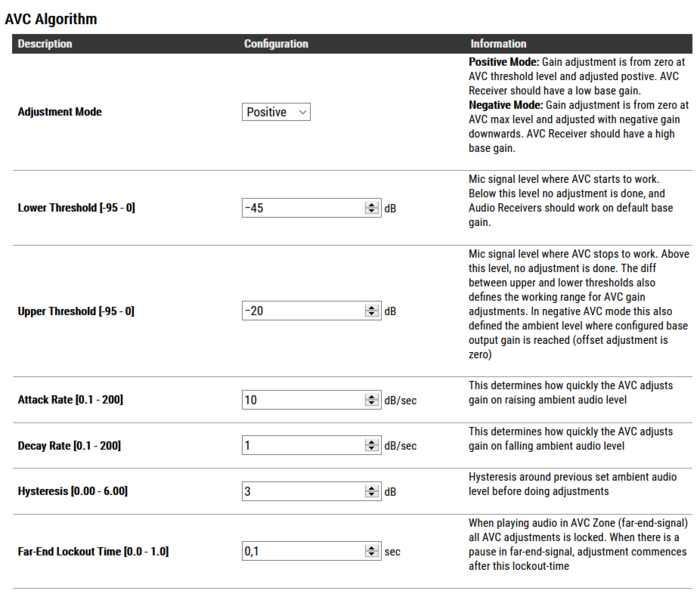 For the DAVC feature to work properly, the AVC Sources must be exposed to the same audio as the AVC Receivers.

Due to this, the AVC Sources (microphones) must be included in the same group calls as the AVC Receivers (ENA amplifiers).

In this example one channel of an ENA Amplifier is used in one zone, and the other channel is used in another zone. There is one TKIS in each zone, measuring the ambient noise level in the zone. The TKIS with directory number 123 must be configured to adjust the channel 1 output of the ENA Amplifier, while the TKIS with directory number 124 must adjust channel 2. 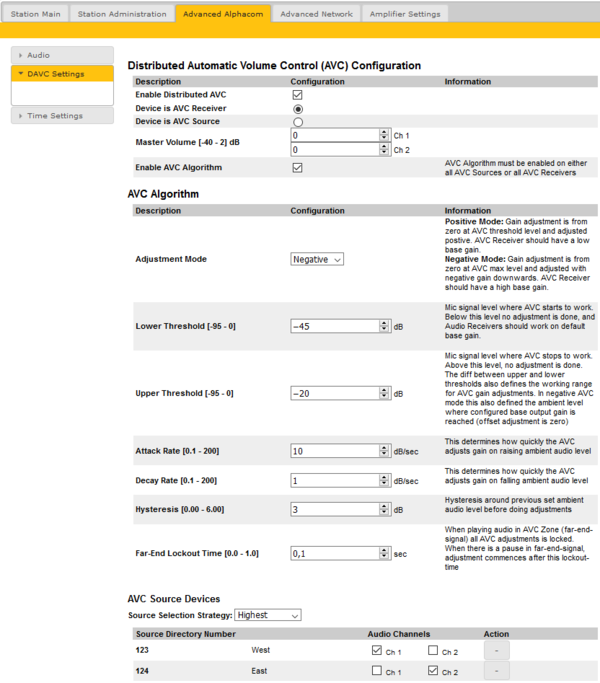 DAVC Settings in the ENA Amplifier

Both TKIS kits must be configured to report ambient noise level to the ENA Amplifier at IP 10.9.8.117:

DAVC Settings in the TKIS kits

From AlphaPro, in the Groups > Local Groups window, include the ENA Amplifier channel and its related AVC Source in the same group.

The AVC Source must be in the same group as the amplifier channel
Retrieved from "https://wiki.zenitel.com/w/index.php?title=Distributed_Automatic_Volume_Control_(DAVC)&oldid=223053"
Category: